It can feel like a darkness, pervading through your entire body and mind.

Nothing is fun and everything is grim.

Like the soul of the world has gone far away.

But it’s not outside of us, its on the inside…its depression.

Everyone has ideas on the best way to tackle depression, from diet and exercise, to emotional support networks and medication. But some people are using plant medicine in an attempt to lift their spirits and hemp CBD oil is currently being used by thousands of people in an attempt to feel happier.

But is there any truth to the claims made by users and the media?

This article aims to provide some basic information about cannabidiol (CBD) and also what science is saying about its effect on the brain. We will also take a look at the potential for its use as a possible treatment for depression and anxiety, conditions that can arise in different age groups and for many various reasons.

Cannabis Sativa L is the scientific name for hemp. It is an annual herbaceous plant which grows in many regions, including tropical areas and temperate climates.

The ancient use of hemp and cannabis oil has been linked to its analgesic properties. It has been used to increase the pleasure of food and music, and as support for religious meditation.

Its first medical indications as an anaesthetic, hypnotic or analgesic date from a Chinese medicine book 4700 years ago.

Cannabis produces naturally high concentrations of chemicals known as cannabinoids. The two main cannabinoids are CBD (cannabidiol) and THC (tetrahydrocannabinol). THC is the cannabinoid responsible for its psychoactive effects, which are the primary motivator for most cannabis users.

The Chemical Composition of CBD 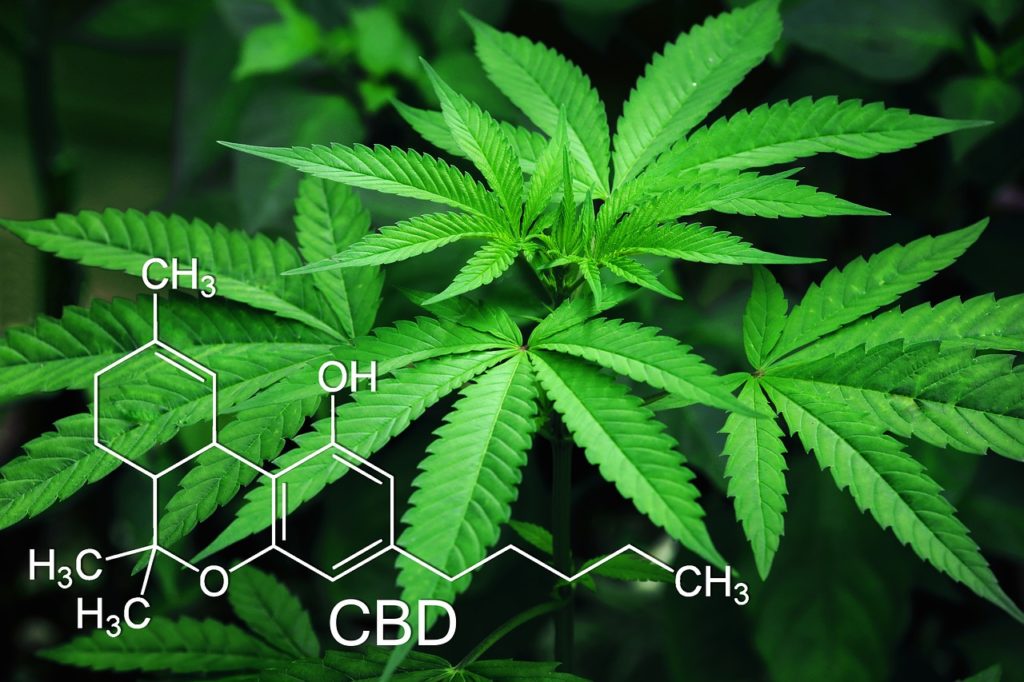 THC and CBD are the two most naturally abundant cannabinoids in cannabis, THC represents about 12-25%, and CBD is 1-4% approximately. CBD has similarities with THC, only that CBD is not considered psychoactive in nature.

The chemical formula of cannabidiol is C21H30O2, and its molecular weight (like THC) is 314.46 g/mol. CBD oil is available in capsules, aerosols, groceries and other products. CBD oil contains more CBD than THC (approx 5% CBD v usually less than 0.2% THC), and even though the total amount of CBD may seem small, it is sufficient to produce the desired effect.

Cannabidiol has the advantage of not being psychoactive, which means people are able to purchase it without needing a medical prescription from a qualified physician. They can also use CBD oils without the fear of being intoxicated or risking an overdose that could seriously affect their health.

CBD is also regarded as safe although it is not recommended to be used alongside existing medication unless a GP or medical specialist has first been consulted.

CBD oil is currently being researched to assess its analgesic, antidepressant, and anxiolytic (anti-anxiety) effects. It is also being analysed to determine if it possesses neuroprotective properties, which, if they exist, could help prevent degenerative diseases like Parkinson’s.

This area requires a lot of research, and with the passage of time, has taken a more vital role. In general, clinical evidence is crucial for the legal acceptance of CBD, primarily because in some countries, it is not yet well known or socially acceptable.

What is Depression and How We can Classify it?

Depression is defined by the World Health Organization as a very common mental disorder, which is characterised by the presence of sadness, loss of interest or pleasure, feelings of guilt or lack of self-esteem, sleep or appetite disorders, feeling fatigued and lack of concentration.

Depressed patients can be divided into three groups according to their symptoms:

The first group manifests depressive symptoms such as sadness, feelings of guilt or suicidal ideation. It tends to affect people with low self-esteem and can cause delusional thoughts, thoughts of death, or suicide ideation.

The second group has symptoms that are not visible at first sight or are not associated directly with depression, like insomnia, anorexia, fatigue, headache, and dizziness.

Symptoms such as anxiety are predominant in the third group, which is also often misdiagnosed and mistreated.

According to some researchers, anxiety is the most common mask in depression, which can be accompanied by sweating of the hands, dryness of the mouth, oesophagal bolus, the sensation of emptiness in the stomach and tightness in the chest.

Cases with severe depression symptoms may need to be referred to a psychiatrist. This includes patients with a high risk of suicide or history of previous suicide attempts, who suffer frequent and severe relapses. Also, those who do not respond to treatment or who have an organic disease that contraindicates the use of antidepressants. Some examples are myocardial infarction, glaucoma, and prostatism.

Could CBD be a Potential Treatment for Depression?

Cannabidiol is now the focus of many research studies which hope to determine if it could have a positive effect on people suffering from depression
Through various studies, it has been found that CBD is a 5-HT receptor agonist. This receptor is located in the central nervous system, which is responsible for regulating the expression of serotonin. This is an exciting discovery and could be one of the properties of CBD that may in the future enable it to be prescribed to alleviate anxiety and depression.

5-HT is responsible for controlling a series of biological and neurological processes, such as anxiety, appetite, sleep, the perception of pain, nausea, and vomiting. For anxiety, depression, spasms and pediatric convulsive disorders, many medical marijuana patients initially find that they do better with a moderate dose of a cannabis remedy dominant in CBD. This is a combination of CBD and THC, and will probably have a more significant therapeutic effect for a broader range of conditions than the CBD or THC alone.

CBD is a safe compound which may have a wide range of therapeutic applications, including the treatment of multiple psychiatric disorders.

Multiple research findings make this compound an attractive candidate for future clinical trials. Some preliminary laboratory research has provided evidence that indicates CBD may have a positive impact on depression. And animal studies have shown that the use of CBD can affect serotonin levels in the body and improve sleep patterns.

It is also common, that with depression appetite can decrease. This is something in which CBD can help significantly. People suffering from depression can experience trouble sleeping, which can usually be improved with a relaxing dose of CBD Oil.

So, research is now intensifying to discover if CBD oil could in the future be used to help those patients with loss of appetite, potentially improving their health and lifting depression at the same time. It’s important to note that your primary physician or a medical professional should be consulted to ensure you do not have an inflammatory state in your body that could affect possible outcomes when consuming CBD oil.

According to some studies, the areas of the brain that play an important role in depression are the amygdala, thalamus, and hippocampus. People suffering from depression and anxiety can have a smaller hippocampus, which directly affects memory and cognition. CBD induces neurogenesis (growth of brain cells/connections), which potentially means it may have the ability to help to regenerate neurons. This could possibly be a successful treatment for depression and anxiety.

A Study on a Ten-year-old Girl

The University of Colorado’s School of Medicine conducted a study on a ten-year-old girl who was diagnosed with PTSD after an incident of sexual abuse. The patient received non-pharmacological treatment to treat anxiety and depression, i.e. only natural nutrition and CBD oil to control the symptoms, for 5 months.
It was observed; as a result, an improvement of the depression, improved sleep, and she was even able to sleep in her own room at the end of the treatment, showing normal behaviour.

This research study concluded that CBD oil is sufficient to reduce anxiety, in this case, caused by post-traumatic stress.

CBD oil needs more research to assess whether it could offer a natural alternative for sufferers of depression. It is especially interesting to those who are searching for options which allow their physical health to remain in optimal condition, without the risk of adverse side effects

Not only is CBD being studied for its potential use for depression/anxiety-related symptoms, but it is also a source of omega oils as well as EFA’s and GLA’s, and it brings a host of other dietary advantages along with it.

CBD oil is rich in over 110 other cannabinoids, and with a healthy endocannabinoid system, you eat well, you sleep well, you have fantastic body-mind balance, and you kick stress and anxiety out. It’s a no-brainer, really.

A healthy endocannabinoid system can also decrease the likelihood of relapse in depression. Other protective factors against a decline into depression include having a balanced diet, exercise, avoid at all costs a sedentary lifestyle, learn how to handle stressful situations, having good family support and good value on the work you do.

When it comes to dosage, its safest to start low with 3 – 5 drops 3 times a day. Increase your dosage gradually each day until you experience the benefits you desire.

If you decide to try CBD oil and notice any unfavourable reaction to CBD consumption, you should go to your doctor and stop using it until the cause of the side effect has been identified.