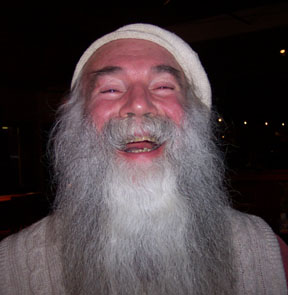 Agua Das, age unknown, is a man of knowledge. With his long Santa beard, wild smile, and hand spun hemp tam on his head he looks like he better be able to pull it off. Das received his B.S. in electrical engineering in 1970, or thereabouts, from the renowned Case Institute of Technology in Cleveland Ohio, Das’s home state. Das soon became unhappy with his chosen field when he learned that his patents were used in Atom Bombs. Das said he headed off to “learn who he was, turning his nose to society”, as his wife, Susan, put it.

Eventually Das decided to audit a master’s degree in humanistic psychology from Sonoma State College in Cotati, CA. He sat in a year of classes and did field work, not to receive a degree in exchange for tuition, but to learn. Being a “reformed rocket scientist” who was studying biofeedback earned him an invitation to be a “living example” at the first ever Rainbow Gathering.

At the Rainbow Gathering near Granby, Colo., in 1972, Agua Das and other attendees all held hands in a circle of spiritual meditation chanting, “Om.” “Considering the elevation the vibration could reach both coasts,” explained Das. As you may know, Rainbow Gatherings are still in progress today all over America; as was Agua Das between ’72 and ’89.

In 1989, at the Madison (Wisc.) Harvest Festival, Das got set up his video equipment to record a police bust. “As soon as I set up my equipment they stopped, and that was my contribution to that rally,” said Das, who then decided to record the speeches on stage. When he watched Jack Herer, father of the modern hemp movement, talk on his taper about food, fiber, etc., his interest was forever peaked.

In Robinsdale, Minn., in 1990, Das ran across some hemp seeds at a store. With Herer ’s words about hemp food nutrition still on his mind, Das bought them all up. As he drove up to a press near Minneapolis, to have the seeds pressed, the police, responding to a crime stopper tip that someone was bringing in marijuana seeds, greeted him. Das explained to them that his seeds were hemp and not pot, that “hemp seeds are legal.” The police checked into it on the dispatch and then let Das continue on. Das was possibly the first person to press hemp seed for oil in America in modern times.

Das got his seeds from the birdseed industry, the only hemp industry to survive the Marijuana Tax act of 1937, to use on his press, until seeds became legal in Canada. Then he got them from the Gitzekula Indian Tribe in B.C. Canada, a contact he made when he was in Vancouver making a presentation on hemp bio-diesel.

Agua was the first person to make hemp bio-diesel fuel in the modern hemp era in 1993; made from virgin hemp oil he pressed himself. It’s “the most accessible act of energy independence next to riding a bicycle. You don’t have to modify the car, you just modify the fuel,” said Das. Das agreed that hemp oil for bio-diesel is too expensive, but to prove a concept was very effective, such as driving a senator around the capitol on hemp bio-diesel to gain support for a hemp bill, such as the one Das helped work on in Colorado.

Das began to work for hemp and common sense in Colorado, where he still lives today. Das worked with COHIP (Colorado hemp initiative petition) in 1992 and 1994, but the initiative failed to make the ballot both years.

Next, State Senator Lloyd Casey sponsored a hemp bill. The bill called for research studies to be conducted by Colorado State University. In 1995 the bill did not get out of committee. In 1996 the bill past the Senate, but failed in the House. In 1997, both the House and the Senate approved the bill, but the appropriations committee stopped the bill, even through the bill required no funding. Even though Colorado didn’t pass a hemp bill, Das is still positive. He says, “Even though what your doing seems insignificant in the light of the problem, do it anyway because at the very least it will change you, and who knows you may incidentally bring about a change in society.”

Then Senator Casey retired, and before Colorado Hempsters could build upon their progress, a medical marijuana initiative petition was conducted in 1998. Vicky Buckley proclaimed that the initiative did not have enough signatures, just as she had claimed on the hemp bill four years before. Then she had a heart attack and died. Her successor found thousands of signatures that she had hidden, and proclaimed that the medical marijuana bill would be on the ballot as Amendment 20 in the 2000 election. People in Colorado were asked to Vote 4 20.

Das revealed that the medical marijuana bill came along at a bad time for hemp and hurt progress. Hempsters got out of the way to avoid confusing voters.

Das believes that there are five burning issues dealing with cannabis: 1) Importing Hemp; 2) Domestic Hemp Farming; 3) Medical Marijuana; 4) Religious Use; and 5) The Cost of Prohibition. Agua Das does not want to see cannabis activism divided and conquered. He believes that each issue needs its own focus by specific groups, but added that, “It doesn’t hurt to coordinate efforts.”

Das focuses his effort on developing the means and technology for domestic hemp farming. To do this he founded H.E.R.B. (Hemp Education and Research Board), which exist to develop machinery and processes that will enable the hemp industry to “hit the ground running” once hemp is legalized, including fiber processing, seed processing, fuel equipment, and market development.

Today Das spends much of his time making and selling America’s only hemp-based ice cream sandwiches, called Hemp I-Scream, from Original Sources. Das realizes that hemp is an excellent food source. He understands the nutritional value of the essential amino and fatty acids intrinsic in hemp seed. Das could have developed any foodstuff. As fate would have it, though, a naysayer once told Das that getting hemp legalized would be like selling ice cream in a snowstorm. So that is exactly what Das did.

On New Years Eve of1994 Das found the right consistency for his vanilla hemp ice cream. And true to form, he sold out in a snowstorm. I’m being honest when I say that his frozen treats are better than any I’ve ever had, and I’m not vegan, but the sandwiches are.Today there are 6 flavors, each developed for different reasons. Chocolate was developed next, thinking it would outsell vanilla, but vanilla did twice the sales. “People just wanted to see what hemp taste likes, and chocolate masks the flavor too well,” explained Das. Now there are two chocolate treats, double Dutch chocolate, and chocolate mint. Susan Das, Agua’s better half, was the inspiration behind mango and jasmine. Agua and Susan agree, “None of this would be possible without [Susan].” Carob is the sixth flavor. As a child, Agua’s aunt made him eat carob. “I hated carob,” exclaimed Agua. Then when Agua became a vegetarian, he came back to enjoy the flavor, because it was the only flavor available for his protein powder. “I’ve made peace with carob,” said Agua.

Original Sources I-Scream and I-Scream sandwiches can be found at health food stores from Texas to Minneapolis thanks to Rainbow frozen distribution.

This summer Agua, Susan, and others have been setting up at the famous Red Rocks Amphitheater near Denver, CO. They’ve taken a step up. The expense of vending has increased, but so have the sales, even though the price per unit has increased. Agua says that the shows are not predictable as to the open mindedness of the crowd. “The hip hop crowd was not very receptive,” said Das, but the crowd at ‘Reggae on the Rocks’ was great. As always, Agua and Susan are spreading awareness. Das told me that, “Susan keeps reminding [him] that [they] at the forefront of hemp awareness.”

Agua Das is also very involved with alternative energy. He co-wrote, with Thomas B. Reed, the Handbook of Biomass Downdraft Gasifier Engine Systems (Biomass Energy Foundation Press. 1998.) Recently Das patented new technology that improves the reliability of gasification, a process that burns up more of the tar. Gasification is 85% efficient, producing 1/3 charcoal, 1/3 gas, and 1/3 smoke (tars). The idea of gasification using pyrolysis (burning biomass in absence of oxygen) involves not only burning the solid fuel (charcoal), but also burning up the remaining smoke and gas as well using a downdraft.

Das’s gasifying systems are available for around $20,000/10 Kilowatt capacity. A 10 Kilowatt converter could provide electricity for 10 homes. In some parts of the country a person can get paid by their local electric company for supplying more energy to the electric grid than they use. This investment is based on net billing, a retail price for the energy. The price the electric company sells it to us for.

Deciding whether to install a Gasifier?

In Colorado, where Das lives, the price is $0.08.5/kilowatt hr and the maximum input is 10 Kilowatts, which comes out to $6000/yr. 1/3 goes to the investor of the equipment, 1/3 goes to the fuel input, and 1/3 goes to the maintenance person at $2000 each. An investor could also be the maintenance person as well. Using these fugues, ($2000/yr) the investment of $20,000 would pay for itself in 10 years. In Minnesota, however the maximum input of 40 Kilowatts. The 40 Kilowatt machine costs an initial investment of $80,000. It would yield $8,000/yr to the investor (at same cost factors 8.5 cents/kilowatt hour) and would also pay for itself in 10 years, and then yielding $8000/yr to the investor. The math involved in pretty easy to understand and is much easier than figuring the interest on a bank loan.

Energy is the lowest value usage. So hemp is a valuable option, but waste material and byproducts should be used first. Woodchips fetch a price of about $20/ton. Hemp Hurd farmers at this same price structure would make $240/yr/acre at a 10ton/acre yield.

Deciding if this is a good investment requires figuring the price per kilowatt-hour and the maximum input the electric company allows. The investment should pay for itself in 10 years, and then yield $500+/mo for a 10-kilowatt Gasifier. Plus there will not be an electric bill. Please call Agua Das to find out if it is a good idea to do this in your area.

It refers to a Hindu blessing that means: ‘Thank You God, Hail Ganja, From The One, Praise Remover Of Obstacles.’

How CBD Works With The Endocannabinoid System

Hemp Oil vs CBD Oil – What Is The Difference?

by hempfrontiers
Change Location
To find awesome listings near you!