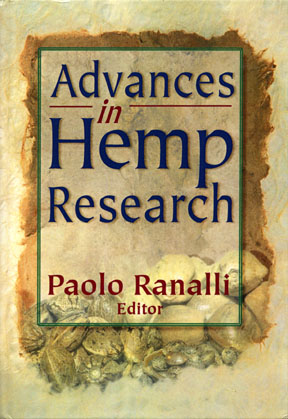 This is the modern compilation for all your hemp questions, with the answers coming from years of hemp research done in Europe. If you don’t have a degree in agronomy or a heavy background in agriculture and terminology then this book may be a bit of a hard read, but it does cover all of the information that is needed to piece together the results of dozens of years of hemp farming in Europe.

Its contents include a detailed look at Cannabis genes, taxonoly and hemp breeding techniques, Biogenetic info, THC variations, crop rotation, methods of planting, seeding rates, growing conditions, nitrogen trials, study of the potential yield of hemp crops, a survey of the pest to hemp, plus genetic improvement, and advances in biotechnological approaches, pulping hemp fiber, and a look at hemp nutrition. Advances in Hemp Research is a valuable reference book for all hemp researchers. It’s like the official hemp science book. It is filled with great graphs and tables to help the readeer see the results. The info is based in Europe, which means that the information doesn’t directly correlate to American soil and conditions, but it gives us the best view of what to expect if we do ever get to grow hemp in America.

This is the book I was waiting for. I had trouble understanding all the technical issues, but I am better off for getting through it. It’s not reading for fun, but for knowledge. I used this book extensively in my hunt to find the facts!

The Emperor Wears No Clothes 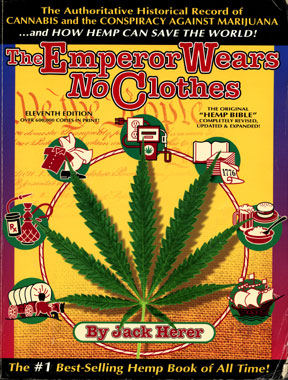 “The Emperor” is the most important book ever published about hemp. From its original printing in 1985 to, say 1995, the comprehension level of the magnitude of government perfidy rose exponentially among those of us who were already actively opposed to cannabis prohibition laws.

Our position prior to reading “Emperor” might be summed up as, “Yeah, marijuana used to be used for making rope, but now we have nylon. Government has no legitimate interest in whether or not I smoke it.” That position was (and is) not mistaken, but it misses the point a little.

“Emperor” exposed to us the fact that hemp is not illegal because it looks like marijuana; marijuana is kept illegal to keep hemp from competing with other products in the marketplace.

About halfway through “Emperor” the reader suddenly realizes he’s looking at the history of much of what we hate and fear most about America–the government’s capability and inclination to partner up with conscienceless corporations to prevent marketplace competition. Can you think of anything more morally reprehensible than to destroy the lives of tens of millions of people, literally killing thousands and thousands of them, for no better reason than to reduce raw material competition in production of paper and broadcloth products?

You can not call yourself a hemp or cannabis activist until you have read “Emperor”.

In the chapter, “Hemp Discovers America,” Frazier proves that hemp was growing in North and South America long before Europeans brought their seed. Using only first-hand sources (explorers of the 16th and 17th century) Frazier assembles a body of evidence to that effect. Frazier explores the idea that the ancient Phoenicians traded with native North Americas. How else could one explain the Roman and Hebrew coins found in Kentucky? Frazier writes with great clarity of thought, expanding beyond the hemp plant itself into ancient cultures.

Without Frazier’s 1973 article, “Hemp Paper Reconsidered,” the second portion of the book, Jack Herer would not have been inspired to write his influential, The Emperor Wears No Clothes. Frazier gave the hemp constituency its first glimpse of historical facts (’73). He is the first to bring light to the 1916 USDA report, which explains how hemp can yield four times as much paper as wood. Frazier is the first to unveil the 1937 marijuana/hemp conspiracy, which inspired others to research further. This is still the fullest argument I have ever read about making paper from hemp. A must for any hemp reader.

Hemp: Lifeline to the Future

By Chris Conrad (review by Briggs) 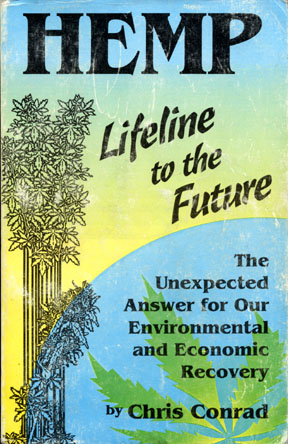 Conrad’s book is the best-sourced and most reliable hemp text available today. I used it as the foundation for my article, “Get the Facts”, in this issue of Hemphasis. The footnotes are located at the bottom of each page, saving a researcher a considerable amount of time. While I’ve discovered errors, Conrad can be forgiven them in a book covering a topic on which the government deliberately hides the truth.

Hemp: Lifeline to the Future gives a well detailed look into the history of the hemp plant, and its decline and prohibition. Conrad does a wonderful job of covering all aspect of the many uses for industrial hemp and showing how the marijuana “smoke screne” is based on lies and misinformation. Conrad gives the reader hope through hemp and marijuana. He gets right down to the point and provides valuable insight into the discussion of modern industrial hemp.

The book has many wonderful diagrams and visual information including the often copied “The Many Uses of Hemp.” The book isn’t written in a topical way, but interfuses the many scopes of hemp production to show the reader the broad way that hemp can help our economy and environment in many ways at once. Hemp: Lifeline to the Future was published in 1994 and much research and development have been done around the world on the amazing hemp plant. My only wish is that someone as intelligent and as pleasant to read as Conrad would publish an updated text similar to Conrad’s.

The Comeback of the World’s Most Promising Plant

Roulac provides hope for tomorrow as he covers every aspect of industrial hemp farming and what it could mean to the world economy, the environment, the farmer, and everyday life. Roulac diagrams all six parts of the hemp plant (seed, leaf, root, long bast fiber, medium bast fiber, and hurd), showing what each part could mean to modern industry, disputing misinformation while providing a good history of hemp, including ancient hemp uses, the Dupont, Anslinger, Hearst, and Mellon Hemp/Reefer Madness conspiracy of 1937, and the modern comeback of hemp, and modern farming techniques.

His predictions and projections are a little off, but his mastery of the subject and his passion for healthy and spiritual living come shining through. Horizons is still the bar by which other industrial hemp books are judged.

If you want to learn a lot about hemp from a reliable source, but you don’t have a lot of time to read, this is the book for you. Printed on hemp paper, Industrial Hemp offers the hemp history of China and Europe up to modern times, including the importance of the decorticator machine, and how hemp led to victory in WWII. Hemptech shows how valuable hemp is as a renewable resource, as a fiber. Much is covered in a short space; from green farming, to the superiority of hemp over cotton, to what possibilities exist, and how to change your own life.

Roulac and Hemptech give a great overview of the more than 25,000 uses for hemp, plus valuable county-by-county information. This book plants the seed, so to speak, in readers minds, getting them to think about the importance of local economics, local jobs, local processing, and how hemp is perfectly suited to improve these areas economically.

A Modern Introduction to Hemp

From Food to Fiber: Past, Present, and Future

2003; Benhaim, Paul A; Published by Paul Benhaim (reviewed by Briggs)

This book will definitely increase your desire to eat hemp foods. After reading A Modern Introduction to Hemp, I realized that I have been poisoning myself with hydrocarbonated food.

I realized that it all starts with food. If we change the way we eat, we will positively change the world and our bodies.

Benhaim shows all aspects of hemp foods, the hearth benefits, seed, oil, seed cake, flour and diagrams the protein content, fiber, essential fatty acids, and WHY THEY ARE SO IMPORTANT TO CONSUME, and how meals that include hemp help people leave a more spiritually in-touch life.

It’s a compact read for hempers and beginners alike, easy to read in one night, and hard not to. It also features elegant and comprehensive info on all aspects of hemp, including eye-catching sidebar info on hemp history, like a recipe for hair restoration using hemp from an ancient Chinese recipe.